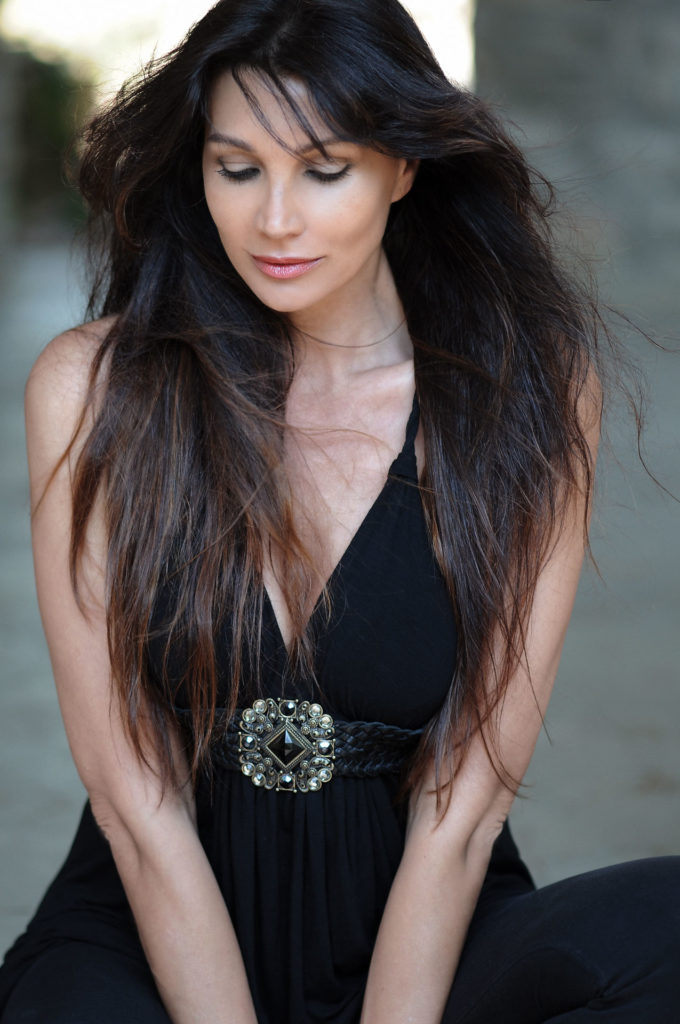 Luisa was born in Palazzolo sull’Oglio, a small town in the province of Brescia, Italy. Since she was a small child, Luisa has been keen on several art forms such as music and poetry.

At 18, Luisa moved to Milan and began performing in nightclubs with the “Tequila Band”, the collaboration will last for many years experimenting with a variety of music genres and performing in several clubs and conventions. Further to singing school, she started learning elocution and acting at C.T.A. (Centro Teatro Attivo) and later on at C.S.A. (Centro Studio Attori) in Milan.

In 1988, she began her career as the back vocalist of famous Spanish singer Miguel Bose, performing with him at the Sanremo festival.

Four years later, she participated in the 53rd Castrocaro festival and she placed second in the contest with the song “Dove Vanno a Finire gli Amori” (“What Happens to Love Stories”), written by Italian song writer Depsa.

In 1997, she is hired by the Italian national broadcast channel Rai1 as a singer for the Sunday afternoon TV show ‘Domenica In”, hosted by Fabrizio Frizzi and directed by Michele Guardì.

Her performance was noticed by Corrado Mantoni and his team of tv writers who asked her to co–host with Giampiero Ingrassia the TV show “Tira e Molla”, broadcasted on Canale 5.

The following year, again for Mediaset, Luisa was asked to co–host the sport show “Controcampo” with Sandro Piccinini which belonged to channel Italia 1. Thanks to her notoriety in the sport field, every Monday she also wrote about Serie A football matches for the daily sport newspaper “Tuttosport”.

Her first experience in cinema dates back to 1997 with the film “Nirvana” directed by Gabriele Salvatores where she plays the role of the goddess Kalì. The film was awarded multiple times including with a David di Donatello gong.

In the year 2000, Luisa landed her first main role on screen in the comedy “Al momento giusto” with Giorgio Panariello. The same year at the Ariston Theatre, Luisa sang classic songs for the show “Sanremo si nasce” on Rai 1 with Michele Cucuzza and Massimo Lopez.

In 2002 she returned to such stage, but this time as a contestant of the 52nd Edition of Sanremo Festival singing “Ora che ho bisogno di te” in a duet with Fausto Leali. They would attain 4th place and excellent consensus from the audience and the critics.

In addition, in 2002, Luisa was offered to host the TV show “Notti Mondiali” together with Marco Mazzocchi and Giampiero Galeazzi. Besides hosting, Luisa sang a repertoire of international songs to celebrate the spirit of the world cup. The show was very successful and Luisa was asked to host another prime time show called “Sì, sì è proprio lui” about scouting emerging comedians, directed by Pier Francesco Pingitore and produced by Ballandi Entertainment.

As testament to her success, in 2003, she was back to the Ariston Theatre in Sanremo to be awarded the “TV Oscar” as emerging personality of the year.

Because of her professional growth, RAI offered Luisa a prime time Saturday night show called “Sognando Las Vegas”, supported by Max Tortota and I Fichi D’India. The show was produced by Ballandi Entertainment and Luisa sang in duet with stars such as Dionne Warwick, Gloria Gaynor and Solomon Burke.

From 2005 to 2010, she was back to “Domenica In” as host and singer Luisa under the artistic supervision of Sergio Bardotti, Marco Zavattini and Beppe Tortora.

In 2005, she released her first album called “Acqua Futura” with the artistic collaboration of Fio Zanotti. Luisa wrote some of the lyrics together with Gatto Panceri and Renato Zero who gave her the song “L’ultima Luna”.

Following the release, there was a tour, which was well received by both press and public. With her powerful and warm voice, in 2005 and 2007 Luisa takes part in two editions of “Festival Gospel” in Milan singing some classic songs of the American gospel repertoire.

Luisa’s debut in the theatre is in 2005 with Maestro Giorgio Albertazzi who chooses her to play the role of the witch Circe and to sing the siren’s tunes in the play “Mami, Pappi e Sirene in Magna Grecia” at Teatro Antico di Pompei. The show will be recorded by Rai 2 and inserted in the “Palcoscenico” TV show.

Again in 2005, Luisa dubs the cartoon “Shark Tale” produced by Dream Work Animation playing the role of the she-fish Lola, whose voice belongs to Angelina Jolie in the original version.

In 2006, Luisa participated to the show “O’Shia” on the Isle of Lampedusa, promoted by Claudio Baglioni. In the same year, she met Tony Hadley, lead singer of the British band Spandau Ballet; they performed together “I Miss You”, a very evocative song, soundtrack of the movie “Russian Beauty”. Also, their two voices together will result in a new version of the classic song “Through the barricades”.

From 2008 to 2010, she was cast as the District Attorney Lorenza Alfieri in the show “Ho Sposato uno Sbirro” with Flavio Insinna produced by Lux Vide and Rai.

In 2010 she releases her second album called “Non Si Vive in Silenzio”, named after the 1972 song by Gino Paoli, which is covered in the album. Roberto Giribaldi provided the arrangements for the song and the whole album. Among the new songs we find “Due Sillabe”, written by Luisa and Riccardo Bonfadini with the artistic collaboration of Alex Britti.

In November 2011, Luisa sails through the world of musicals playing the role of the pirate Angelica in “Pirates”. The musical was written by Maurizio Colombi and tours in theatres around Italy.

During the Christmas holidays of 2012 and 2013, Luisa performed in churches and jails of the region of Lazio showcasing American gospel music and traditional Italian Christmas songs.

In July 2013, her new single “Tutto e Niente” is out. The song was written by the singer together with Amati, Vaccaro and Manzani who also arranged it.

The same year also sees the release of the CD “Capo Verde Terra D’Amore”, a music project collecting songs from the Capo Verde repertoire adapted in Italian in the CD, Luisa proposes the song “Disperato Amore”.

In the summer of 2013, she takes part in a tour called “Festival Show” produced by Radio Birikina Radio Bella e Monella.

From October 2013 and again for four seasons, Luisa hosts and sings in “Manzoni Derby Cabaret” show at Teatro Manzoni in Milan, a music and comedy show by Maurizio Colombi and with music critic Mario Luzzato Fegiz and comedian Brusketta as guest stars.

During the 2014 Christmas holidays, the singer performs in “Pacem in Terris” dedicated to Pope Francis. The event takes place in the Basilica of San Giovanni in Laterano in Rome and it’s conducted by Maestro Jacopo Sipari di Pescasseroli with Marco d’Aquilia Symphonic Orchestra.

In 2016, Luisa collaborated with blues singer Harold Bradley in the single “Everything’s easy”.

The same year saw Luisa as the protagonist of a photographic show called “Love me Love me not”, exhibited in London and Beirut. The pictures by famous Lebanese photographer Abdul Massih promoted a message of non–violence against women from the western world to the Middle East.

Again, in 2016, during the Football European Championships, Luisa was invited to sing in the four instalments of the TV show “Il Grande Match” hosted by Flavio Insinnia on Rai 1. At the end of 2016, she recorded the single “Così Tu Mi Ucciderai” with tenor Joaquin Iglesias, written and produced by Grammy winner Maestro Daniel Victor.

During the summer she collaborates to the project called “Prometheus and Pandora” with the great Sananda Maitreya who wrote classic songs such as “Sign your name”, “Holding on to you” and “Divina”.

From their two voices, “It‘s been a long time“, “I don’t know how to love him” and “If you lived here” were born. As a consequence, 2018 is an intense season of live concerts: concurrently to her “Angolo di Cielo” summer tour, Luisa will collaborate to Sananda Matreya’s “The Fallen Angel Tour” during which they will sing in a duet songs from “Prometheus and Pandora” and popular songs of the American artist.

Luisa, who has been collaborating with the non-profit association “Minuetto Mimì Sarà” founded by Vincenzo Adriani e Leda Berté, decides to record such song as a heart-felt homage to one of the most significant female artists and to the women universe.

Luisa is a well- rounded artist capable of communicating through a variety of expressive ways; her ability to try something different has pushed her to pursue new artistic experiences: from singing to theatre acting, to TV shows until on 9th November, when she also becomes a first time writer with the children’s book “Tofu e la Magia dell’arcobaleno”. It is a musical tale which highlights the importance of diversity. Songs are written by Luisa and Maestro Tonino Scale and sung by children of the “Coro delle Voci di Novara” choir conducted by Maestro Paolo Beretta and Federica Campanella. The illustrations are by Fiora Giovino with two excellent prefaces, one by song writer Enrico Ruggeri and one by the singer and paralympic athelete Annalisa Minetti. The book is published by Acar Edizioni, while the CD by Edizioni River Records.

At the beginning of 2021 her third album entitled “Le cose vere” is released which is a versatile and surprise rich project. Besides the single “Senza di noi” written by Riccardo Brizi with Cesare Chiodo’s arrangement, there are two duets with Sananda Matreya, one of them is the fascinating “Delicate”.